Better Than A Bennington VT Hotel

Wake up each day to piping hot coffee and a hearty country breakfast.

For overnight guests, a complimentary full country breakfast is served each morning at your own private table in the dining room. For your safety during Covid, our spacious dining room has a Hepa air filtration unit. Tables are spaced with a 6-foot distance between seats. You may also choose a take-away option to enjoy your breakfast outdoors on the stone patio or in your room. Either way, choose from several entrée choices to get your day off to a great start.

Breakfast hours are subject to change, but in general run from:
8:00 AM to 9:45 AM Saturdays and Sundays and holidays
7:30 AM to 9:00 AM Monday through Friday

For Lunch and Dinner check out local Bennington Vermont Restaurants. 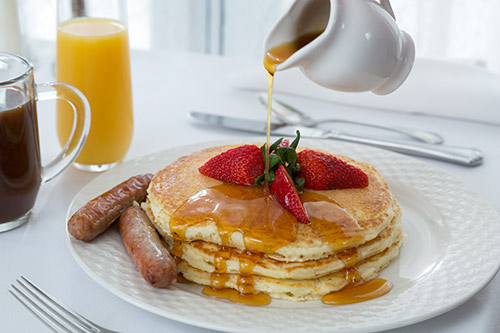 Pete and Lynn Green: Owners, married at The Four Chimneys Inn
Pete and Lynn purchased the Four Chimneys Inn in 2005 after falling in love with historic Old Bennington and the magnificent grounds of The Four Chimneys Inn. After twenty years in the corporate world, Lynn left her position as a VP of marketing for a global publishing company and Pete left his position as an engineering program manager for a Boston high-tech company. They moved to quiet and charming Bennington to restore the inn and to make it a warm and welcoming place for visitors from near and far. “While we have a young son and are not at the inn 100% of the time, we enjoy meeting as many of our guests as we have opportunity. Chatting with our guests and hearing their stories and what brought them here is what keeps it fun!”

We hope you enjoy your stay with us! 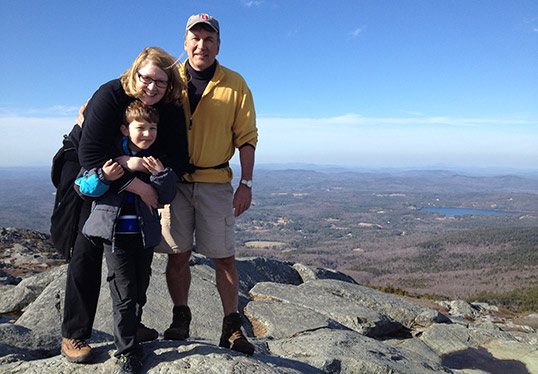 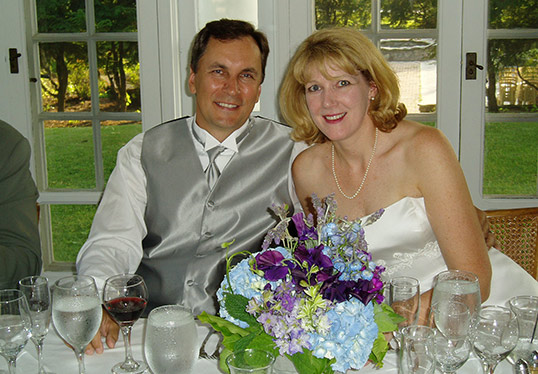 The original building dates to 1783 when it was the home of the Reverend David Avery, 2nd pastor of the Old First Church. Unable to afford the upkeep he sold the estate to Nathanial Brush, a notable participant in the Battle of Bennington, who later became a politician. Brush shortly ran out of money, turning the mansion into a boarding house and general store.

In 1870 Tom Saxton, a Troy NY merchant, purchased and refurbished the property to its original grandeur.

In 1910 the entire house burned to the ground, leaving only the foundation. Philip B. Jennings, a prominent businessman rebuilt the estate as you see it today and lived in it until his death in 1949.

In the 1950’s James Rollis transformed the mansion into a booming fine dining restaurant serving such celebrity clientele as Elizabeth Taylor, Richard Burton and Walt Disney. Norman Rockwell is even said to have painted a scene in the main dining room (although we can’t seem to locate it).

In recent years the mansion was converted into a romantic bed & breakfast. Totally refurbished, The Four Chimneys Inn brings you all of the modern day amenities while maintaining its elegance and old world charm. 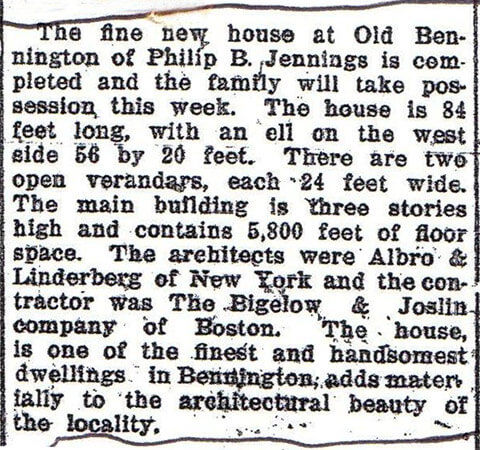